1. Thoughts before the race….

Let me start with a funny joke I made up:

Why did Darth Vader had that heavy breathing?? Because he ran a half marathon! Hahahha 😁

Tomorrow’s the day and I’m shining up like a light saber! (As a friend of mine told me)

I leave at 6 AM to catch a buss to Orlando and I’m already freaking out.. I ordered a Chewbacca sexy costume for this run, but apparently I’m not going to have it delivered on time. I ordered a back up Vader costume and I’m starting to get  nervous and paranoid that FedEx won’t deliver that on time either. AaaAaAAA!!!!

This is not a regular race and I’m not willing to run without a themed costume!!

Ok, but putting the concerns on a side, I am super excited about this. I am going to go with myself and nobody else. The biggest adventure of 2017 so far.

Can’t wait to see myself at the start, with my costume on and my race number pinned to it!

Update: The costume is hereeee: 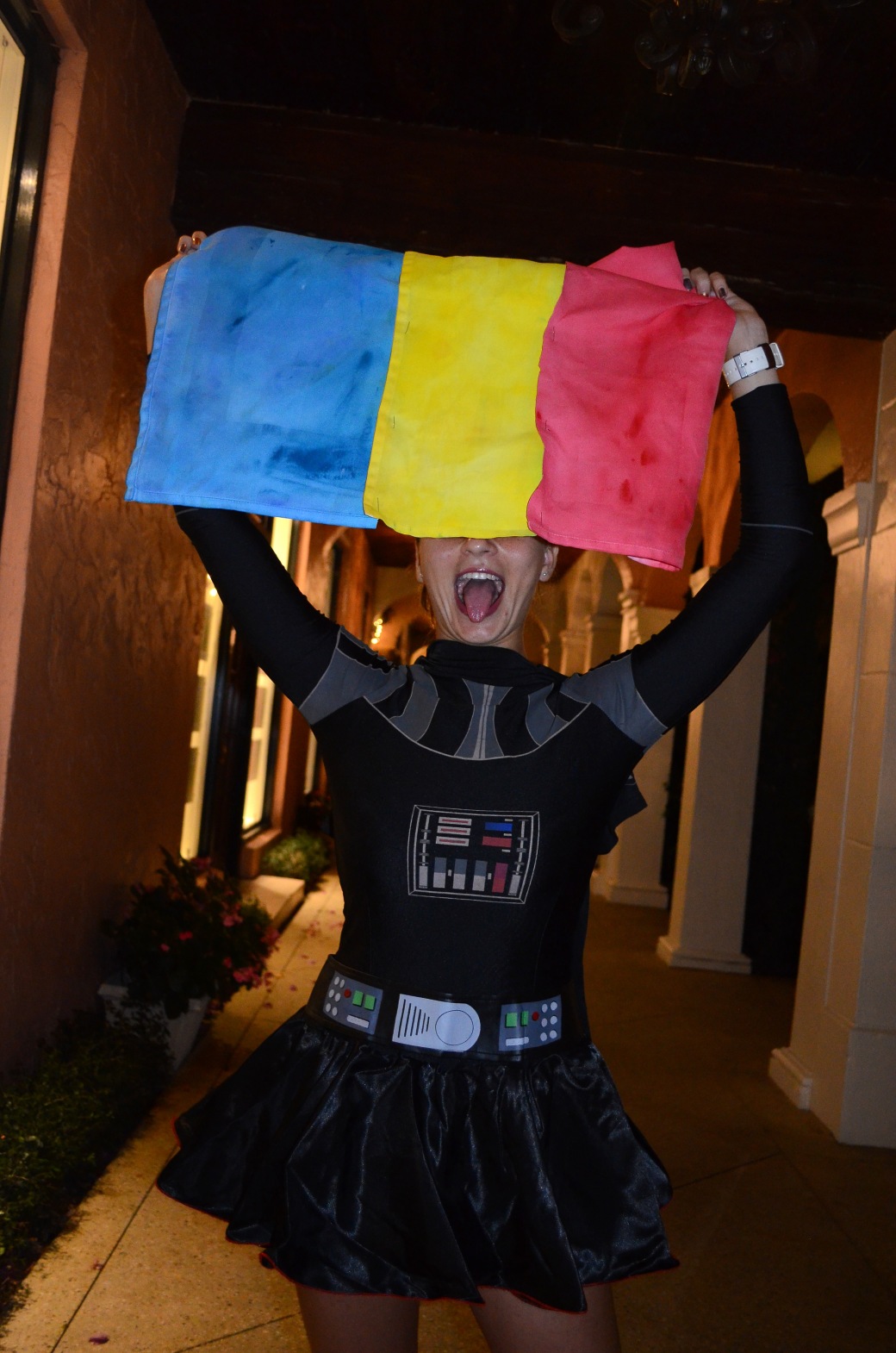 After a long 3h bus ride, I arrived to Orlando. Then another Uber for half an hour and here I am, at the Expo, about to have my number and t-shirt. When I got off the Uber and I saw people wearing SW themed clothes and their numer in their hand, I started to have THAT feeling. The “cannot wait till tomorrow” feeling. So with a big smile on my face I power-walked to get my kit.

Of course, while i was waiting in line for the pick up, one randon runner already asked me where am I from and willing to help me with information, because she participated in lots of Disney runs. And she did, she did helped me a lot with useful information. She even took a first picture of me!

I’ve spent around 3h at the Expo (ESPN  Wide World of Sports Complex), looking at the merchandise. The place was pretty big, but somehow I was expecting more from  the merchandise. More options and less expensive. I didn’t buy anything in the end. But who needs that anyways when you will have That monster of a medal after the race 😁 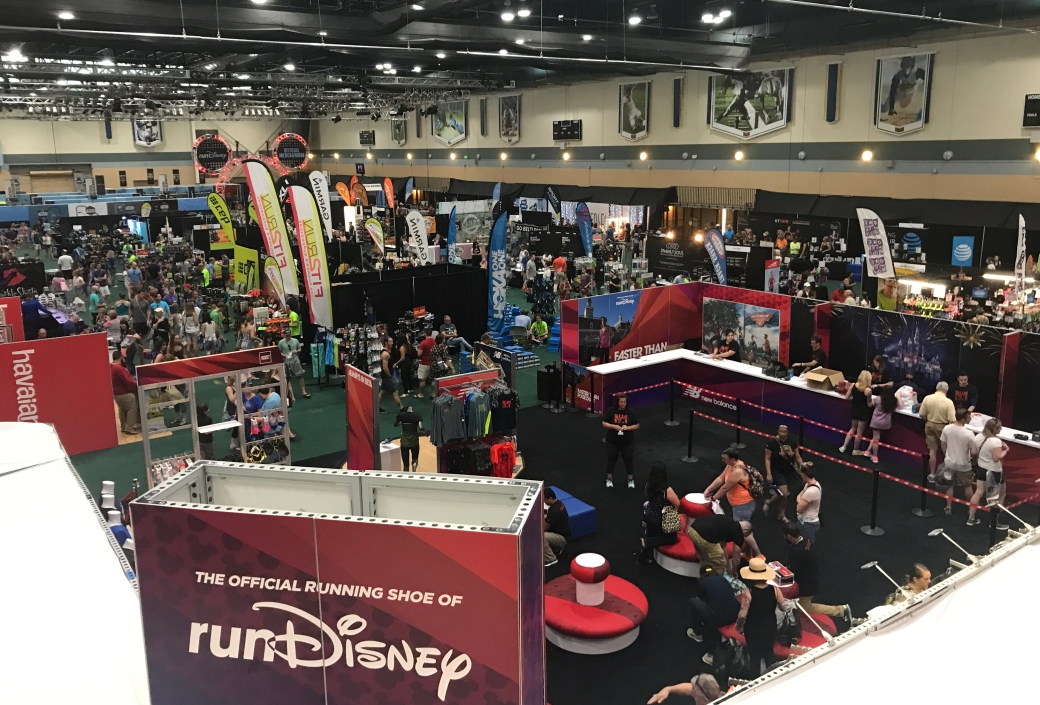 The Expo: The place with cool and expensive stuff

I couldn’t relax much the day before the race. I was still trying to understand to get to the start. They said is not walkable and we have to take the shuttles, but there were so many places from where you could take them. The Facebook group helped last moment and I found out that most of the shuttles listed, were for people staying on property and each hotel provided a shuttle for their guests. So yeah, not for me. That left me with only one option: to be at 3 am in the EPCOT parking lot.

Given so, I encountered another challenge: when to sleep?? In Orlando I was meeting a friend whom I haven’t seen in 3 years and it was the only night we could hang out. Long story short, I ended up sleeping from 7pm to 10 pm. then the force awakens, and we went out for a drink and dance, downtown Orlando.

A little after 2 am, the party was about to get real! My friends drove me closer to the dark side. At the EPCOT parking lot to take my shuttle to the start line. 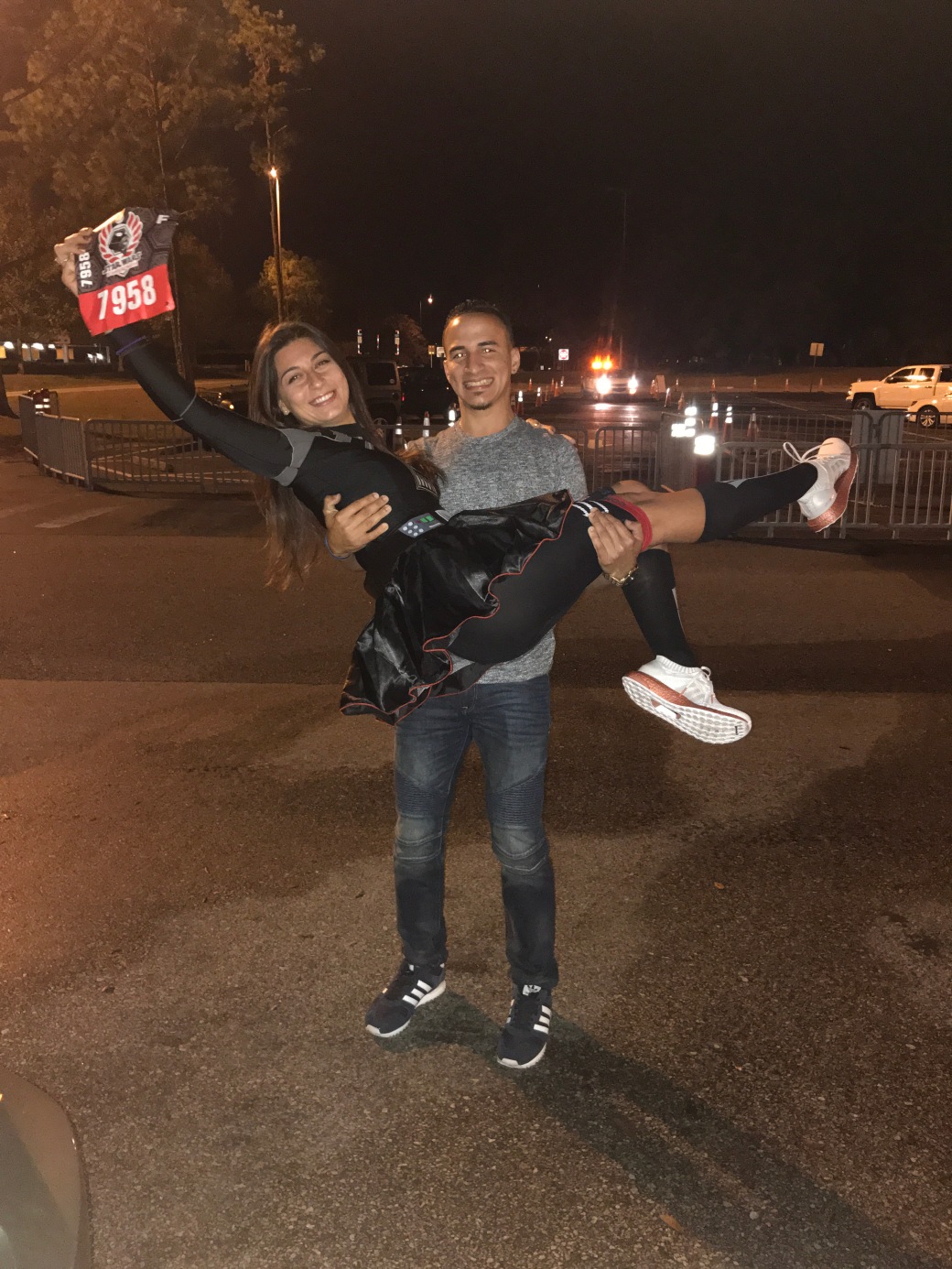 So there i was, after a gin and tonic and watching a live band performance, I put my super sexy Vader costume and I was ready to start .

3. Enough blabla. Here’s the Race Day: The force was so damn strong!

I arrived at the start area. While walking from the bus to the entertainment zone, people were admiring my outfit out loud. Imagine how proud Denisa walked then 😂

Near the start was a big deal going on, Storm Troopers walking around, dressed in original costumes, Vader, Bobba Fett, Leia, Jabba the Hutt, Darth Maul, were there waiting for runners to take pictures with them… a real breath taker. 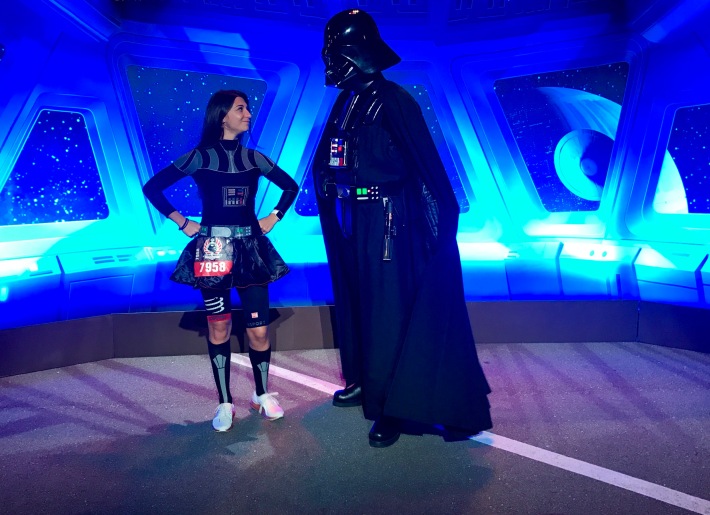 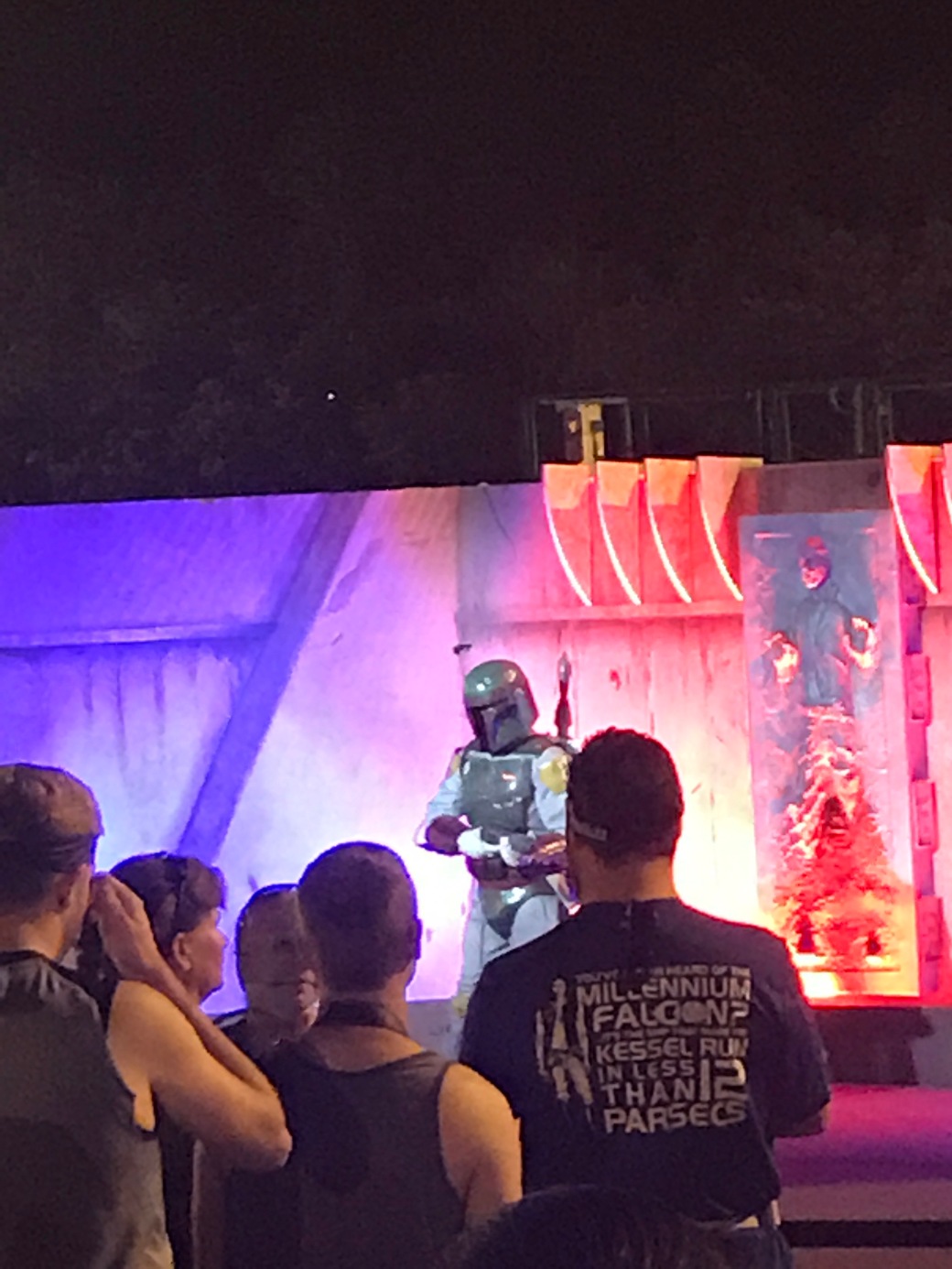 Little did I know what I was about to see on the running course!

After I did my thing with the photos, I went to my corral. Unfortunately because I signed up for the race too late, I had to start in the back, from corral F.

Lining for the start

It took almost one hour for my corral to start. But I enjoyed the other starts meanwhile and watched the fireworks 💥

In that moment I wished I had someone there with me, to share the excitement with.

4. Boom! The fireworks that announced my start were on! Let’s roll!

It was still dark outside and for the first miles/km the road felt like a forest, with coloured lasers and a creepy Star Wars theme song. Niice! It was a really “movie like” feeling. What I didn’t like: Not to brag, but I knew I don’t belong in the last corral! All those runners were soooo slow, that I had to pass then off-road. At some point I was thinking I should have brought my trail shoes instead!

Along the course, there were more movie characters but the line for the photos was huge. At first I passed a photo stop. Even though I’ve said I’m not going to rush or strive for a Personal Time Record, I somehow still tried.

But then I came to my senses: I’m not going to win anything even if I run fast. So I better stop and take all the pictures that I can and enjoy every second of that FUN race. 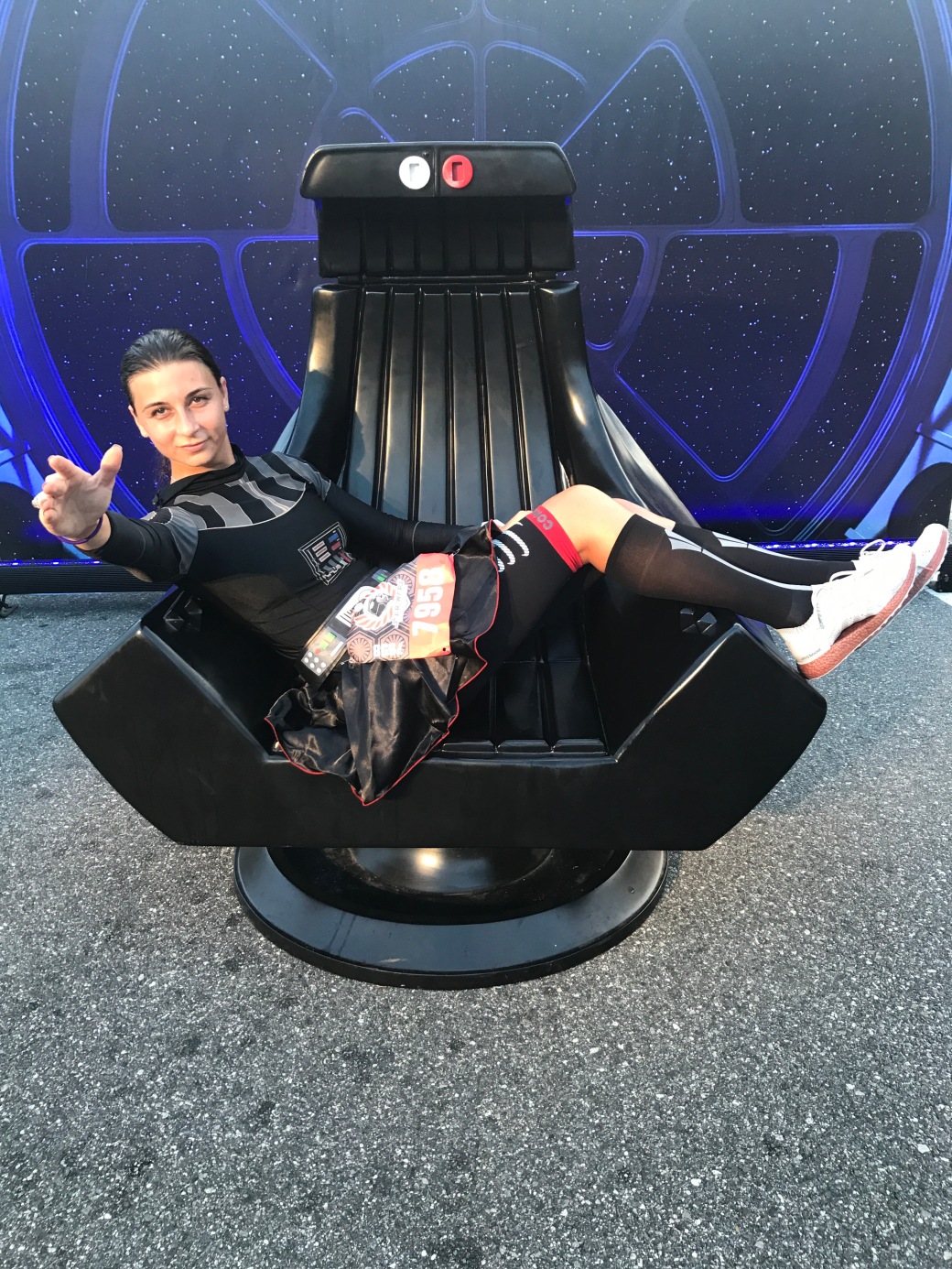 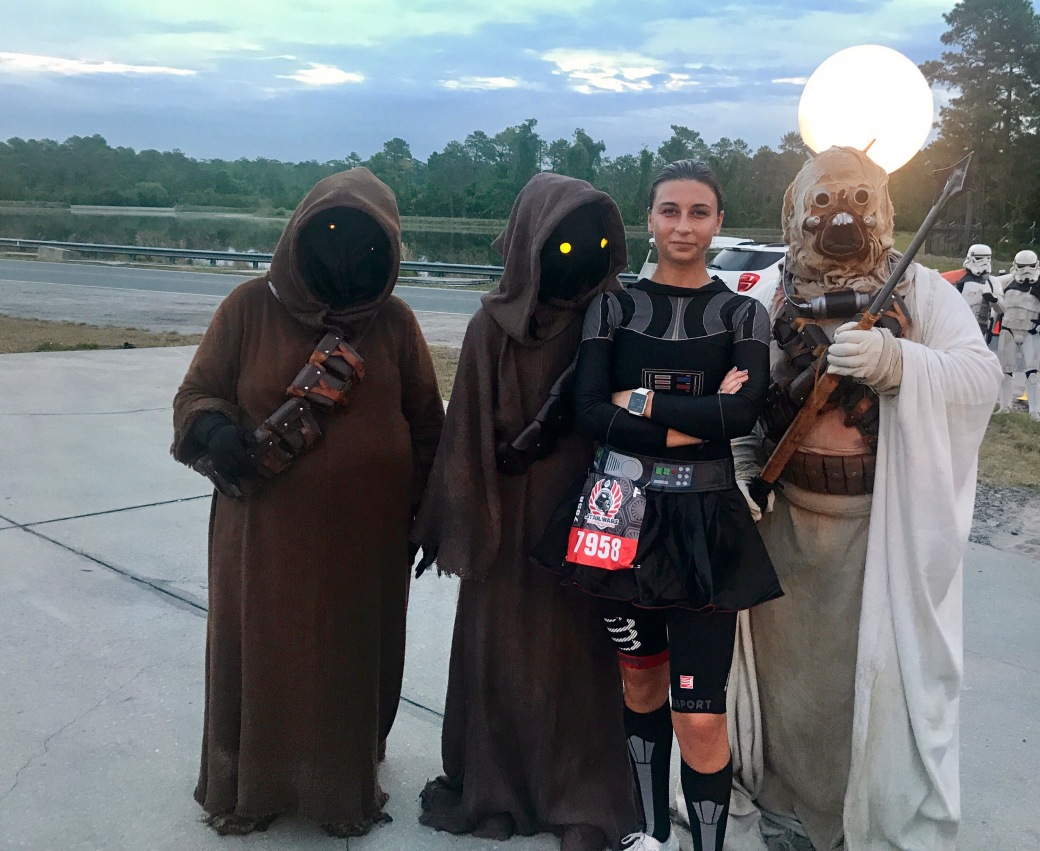 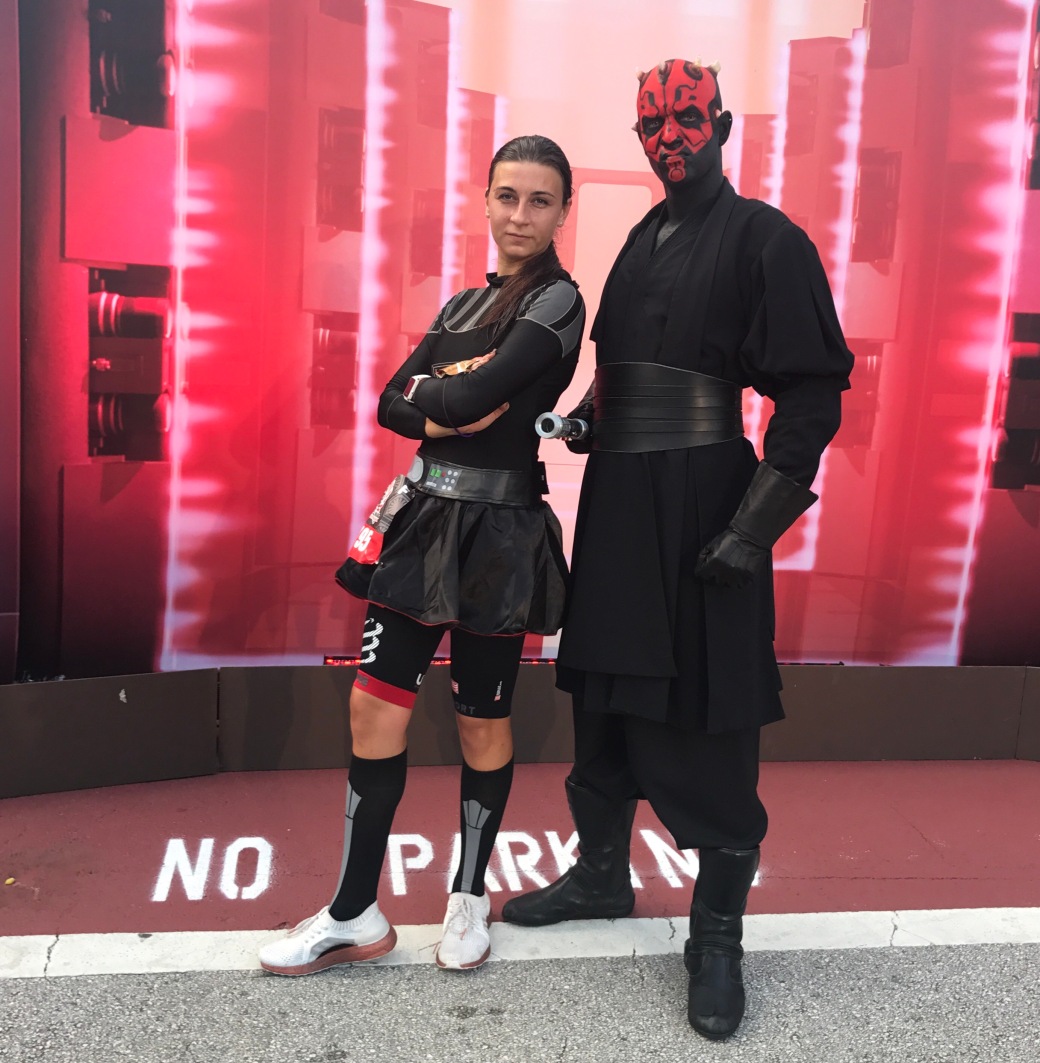 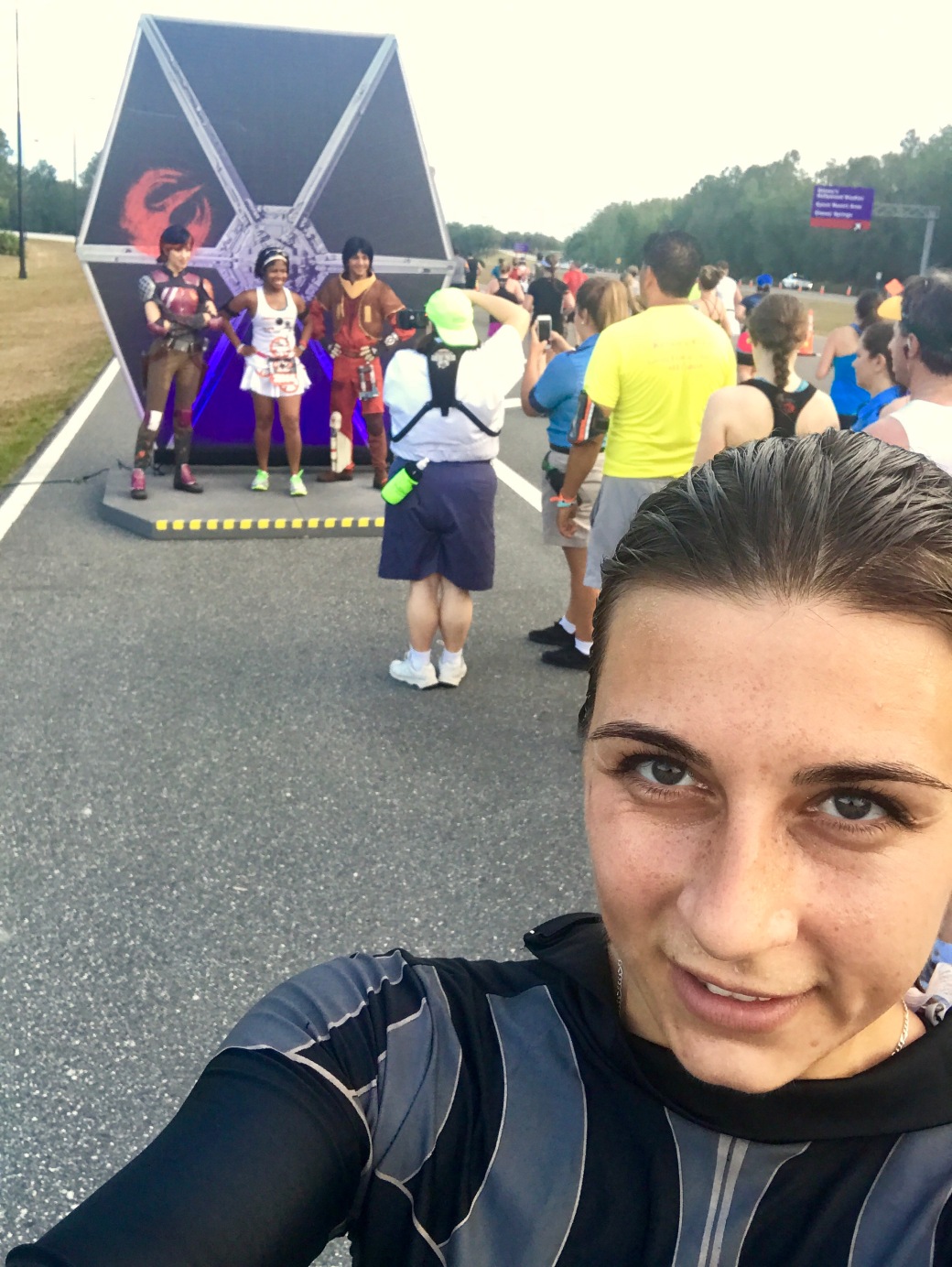 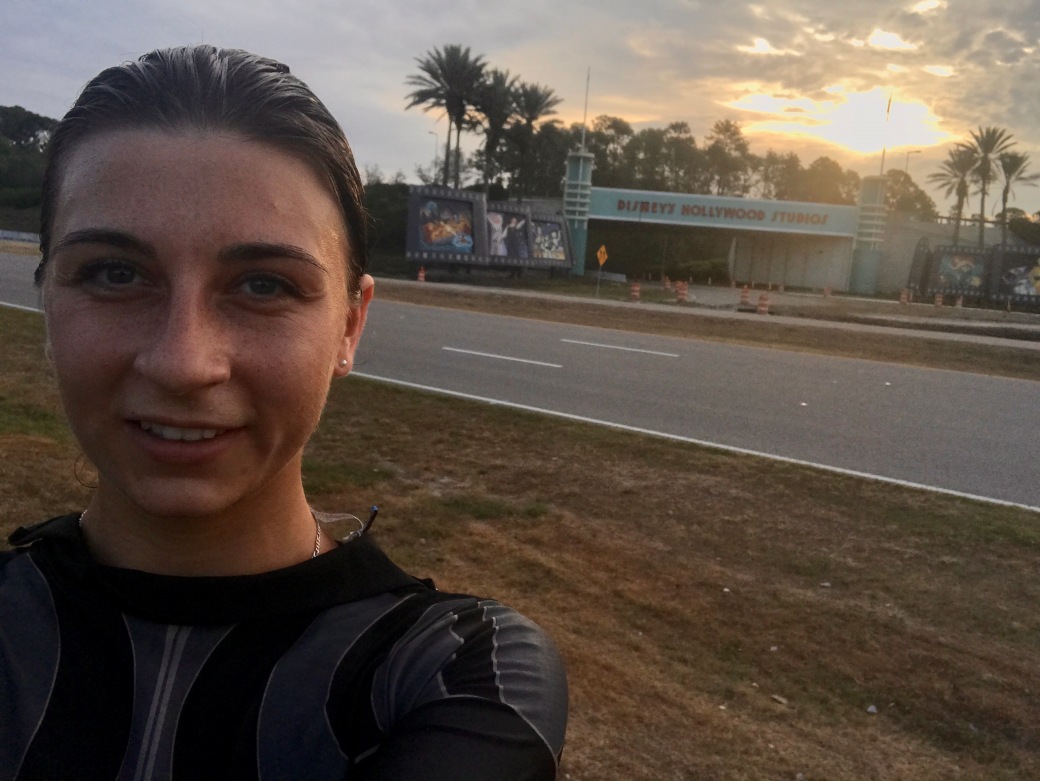 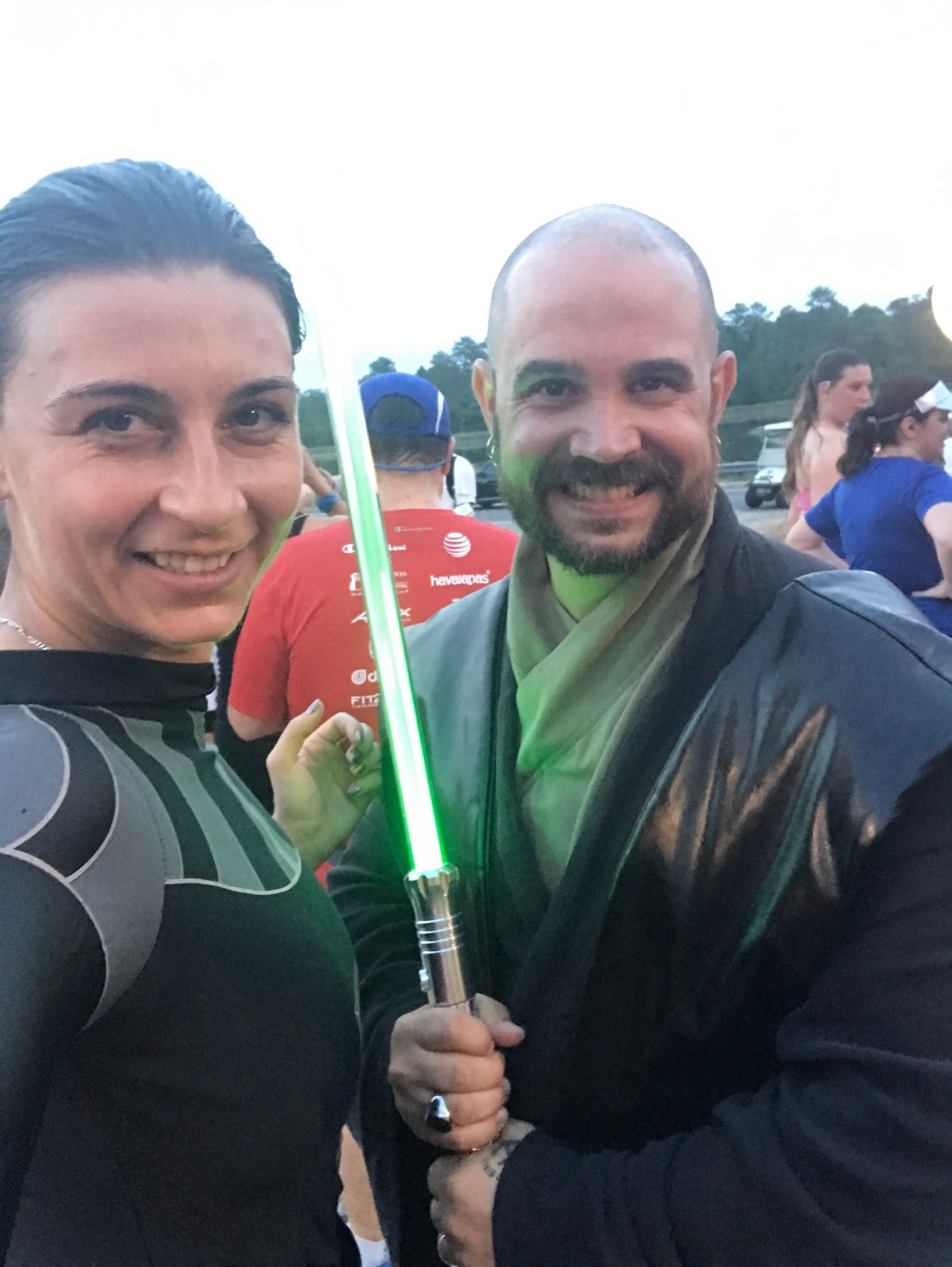 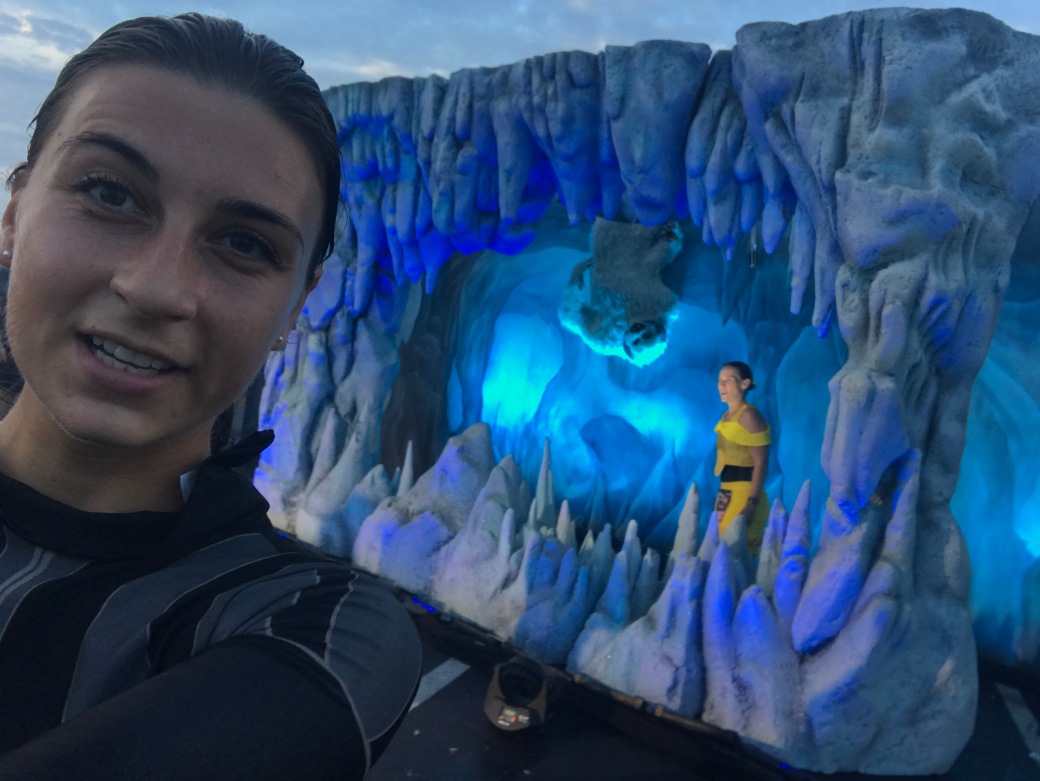 So I did. I stopped, I took pictures and enjoyed myself. The course offers enough entertainment for that. Even watching other runners, the way they are dressed. Trust me, you cannot even imagine the costumes I’ve seen 😂

Speaking about costumes, I was really impressed by the Chewbacca one. So real, funny and somehow still cute: 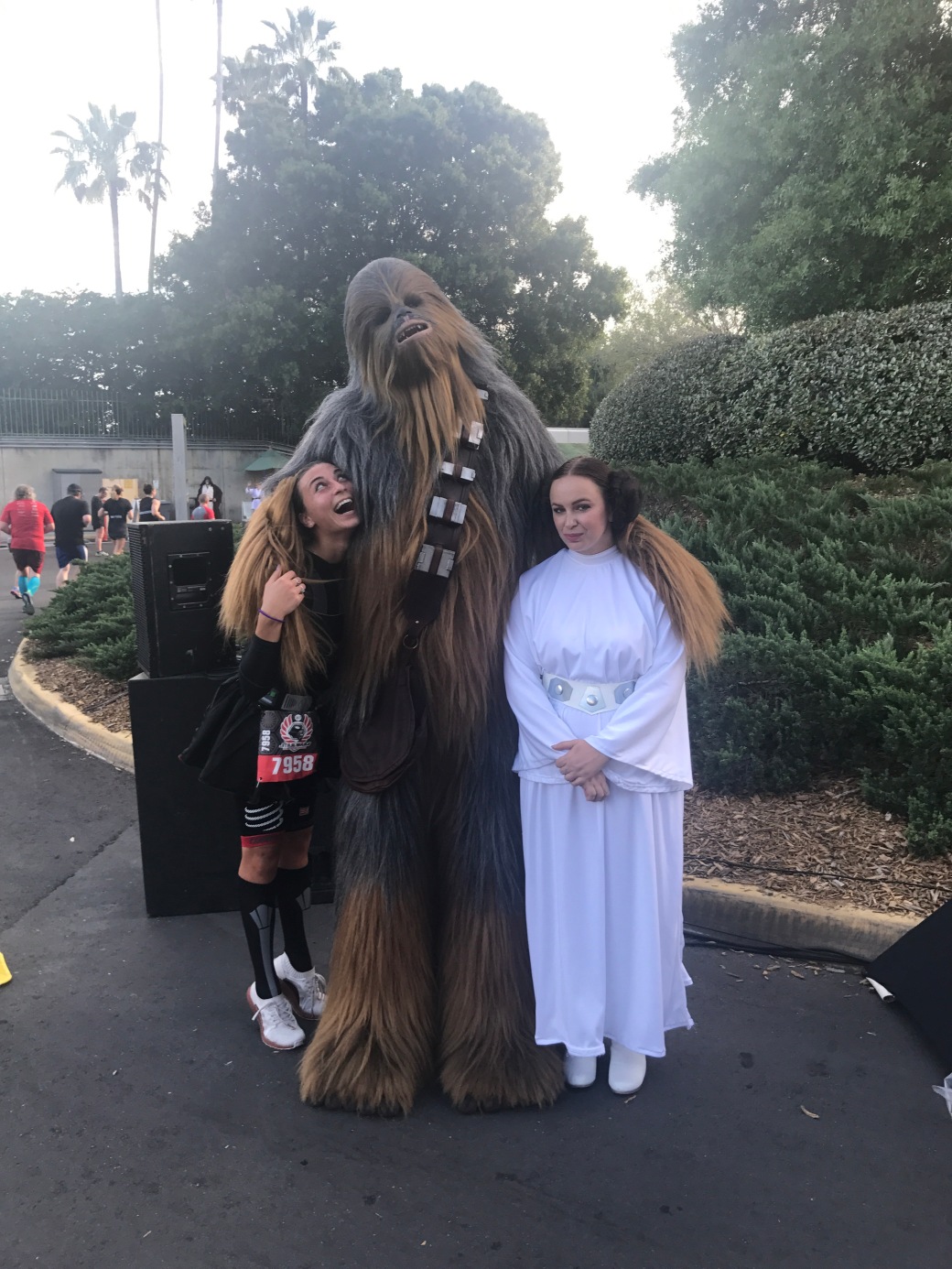 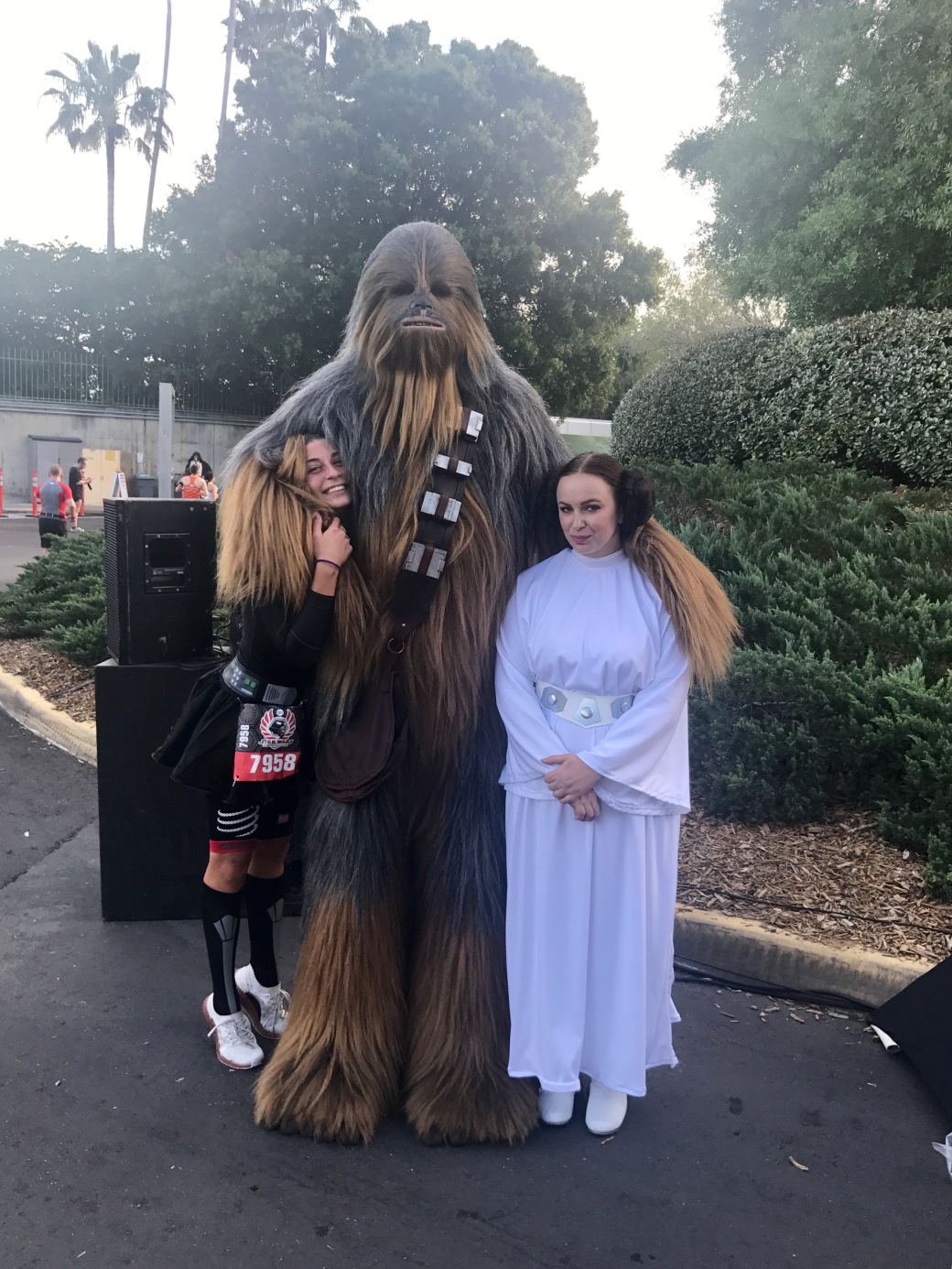 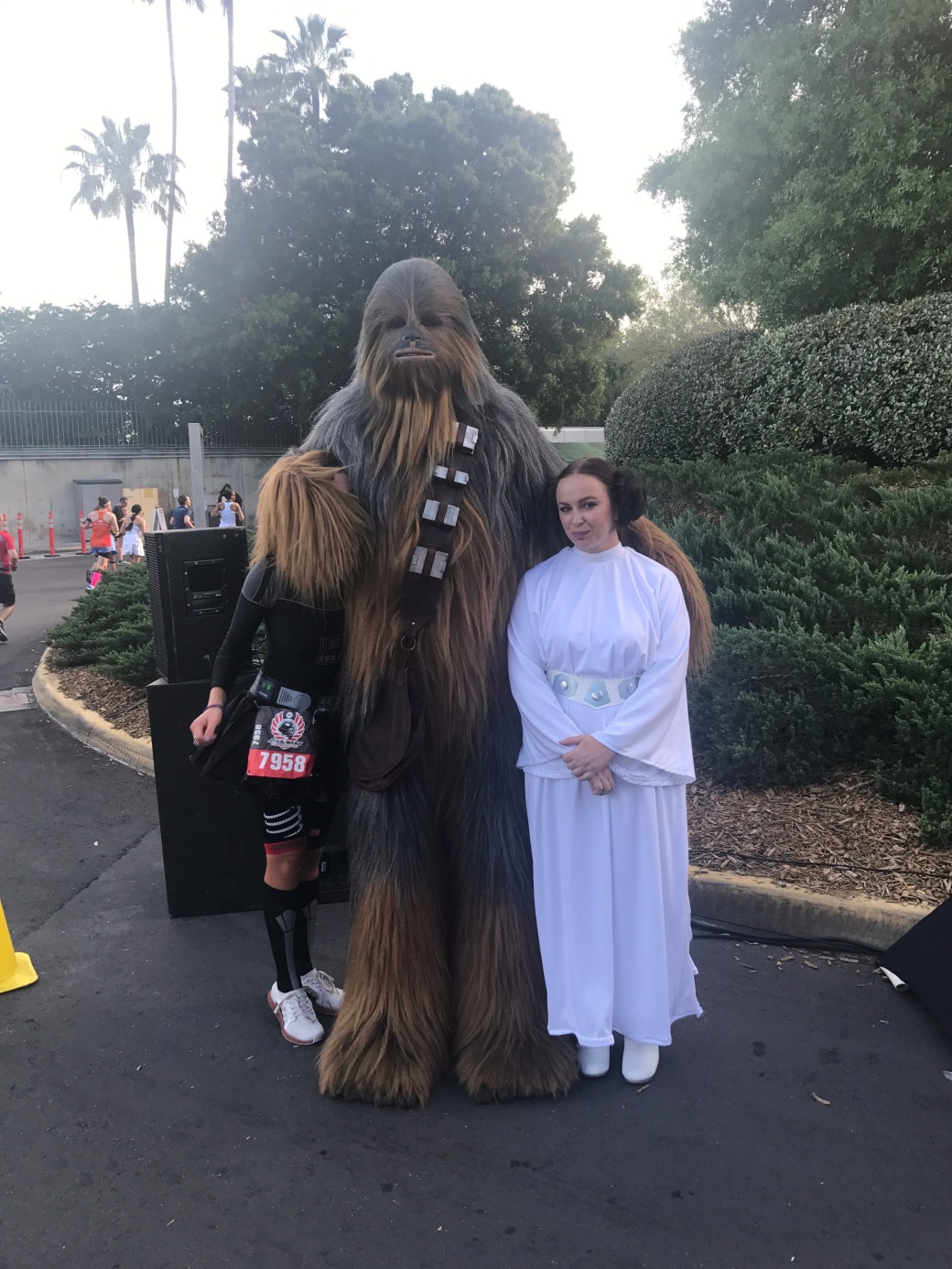 Bottom line, the event was obviously very well organized. Disney is a heavy name and you cannot expect less from them. I will definitely go to another Disney race.

Although I was a little disappointed about some stuff:

Crossing the finish line after 2h:19 min took all the darkness out of me! I was running and jumping and singing, while  proudly taking that medal.

Here’s a proof of that, but with the Disney watermark on the photo, because of course I did not pay 14$ : Good photo even so, right?

After everything was over, I replenished my body with some Oreos, peanuts and tortilla chips and I layed down there in the parking lot, almost falling asleep.

Hint: never go party the night before a race! haha

But I did it! I can truly say I did everything in my power to participate in that race. That’s why I will always remember this race as a special one. 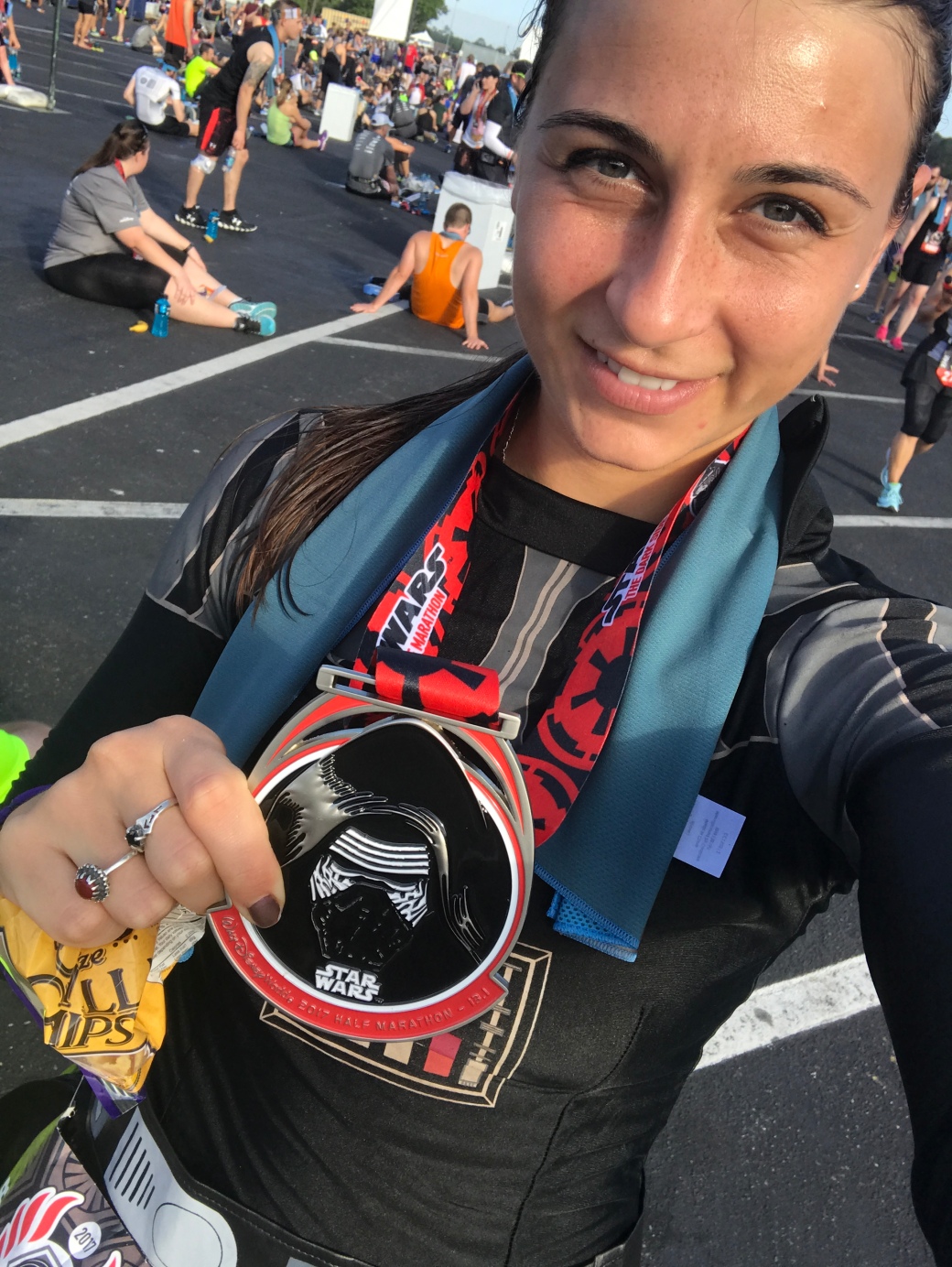 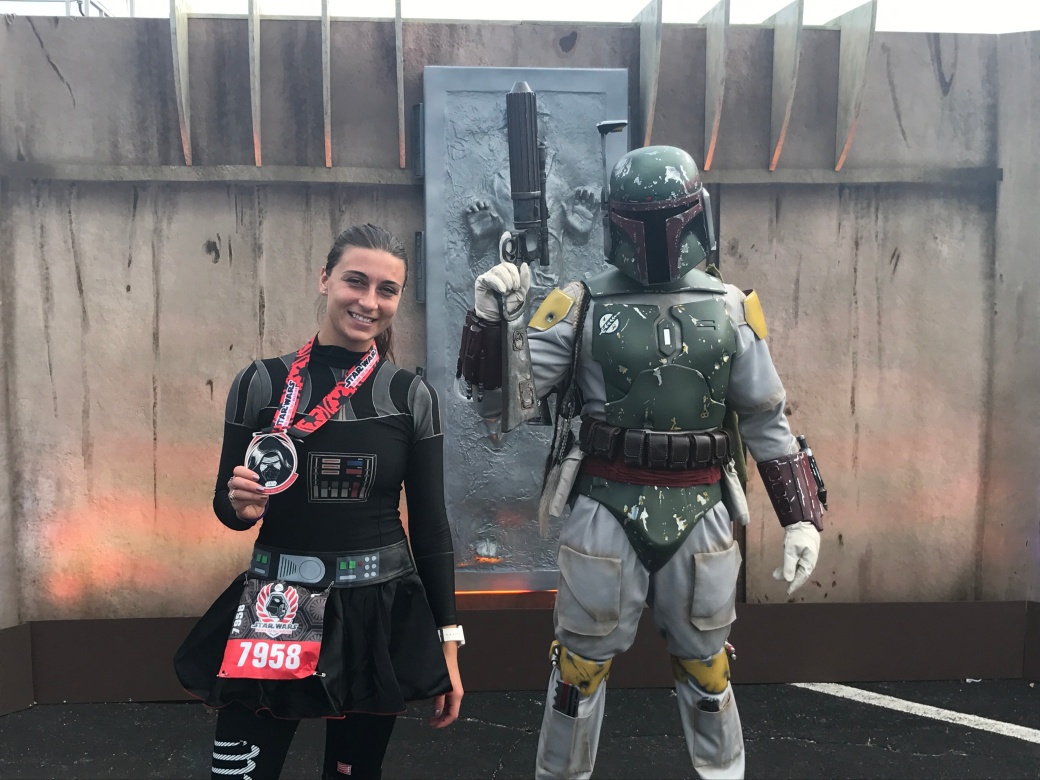 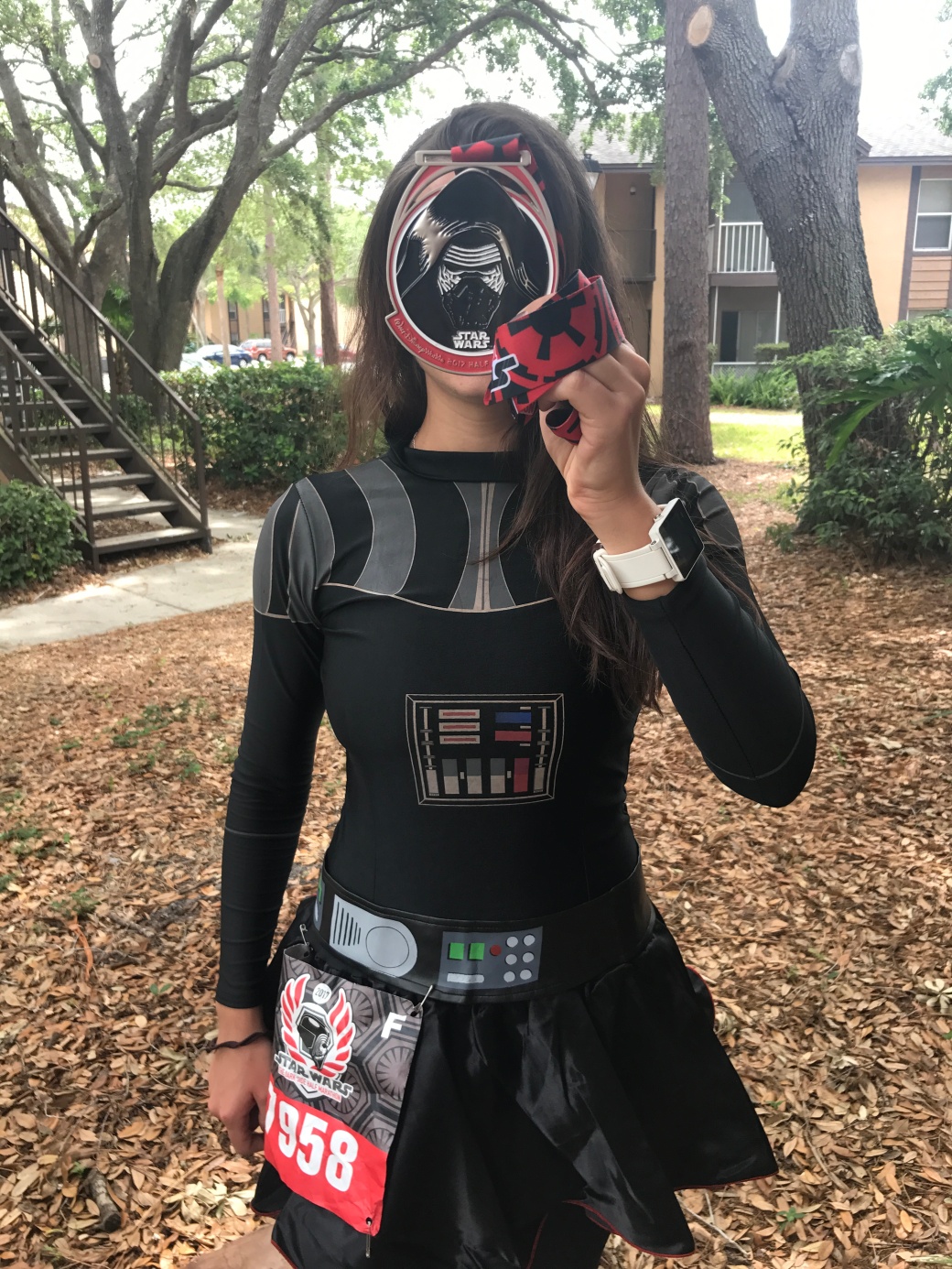 View all posts by Denisa